Medical marijuana is a natural, affordable alternative to traditional medicines used to treat arthritis, which also lacks the side effects found in conventional drugs. Increasingly, many patients who are afflicted with arthritis have instead opted to use medical marijuana to relieve their symptoms. These patients have experienced excellent results, including less pain, reduced use of other medications and improved movement, through their use of medical weed.

Experts believe certain strains of marijuana can specifically help those who have arthritis. Strains of medical cannabis for arthritis include Pennywise, a form of Indica that has mild psychoactive effects. Harlequin, which is a Sativa, is very popular because it provides a relaxing sensation without making the user feel sedated. Cannatonic is a hybrid strain that provides a very relaxing, mellow high that is extremely relaxing, while AC/DC is a Sativa that does not alter perception or mood.

Once you receive a recommendation from your doctor to receive medical marijuana for arthritis, have a talk with a professional at your local dispensary. He or she will be able to direct you toward the best strains to ease your discomfort.

Recent research has shown medicinal marijuana can be an effective alternative arthritis treatment. For example, in a 2005 article published in the Journal of Neuroimmunology stated, researchers J. Ludovic and Takashi Yamamura explained cannabinoids might be a consideration for patients for the treatment of inflammatory diseases, such as arthritis.

Additionally, Ethan Russo, MD, senior medical adviser at the Cannabinoid Research Institute, explained the following in his 2005 “Arthritis and Medical Marijuana” brochure: “Science has now revealed that the THC element of cannabis is an effective pain-killing (analgesic) agent, and CBD (cannabidiol) has particularly immunomodulatory advantages as an antagonist of tumor necrosis factor-alpha, which supports benefits in the rheumatoid arthritis treatment.” 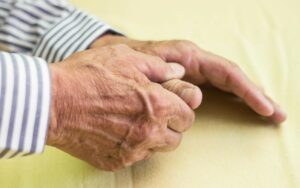