Cannabinoids are known to have neuroprotective and analgesic, or pain-relief, effects. Many researchers have focused on THC in the past several decades of studies of marijuana and cancer-related ailments.

However, many medical marijuana patients and physicians believe that the purified form of THC or its synthetic counterparts are not as effective as orally consuming foods, referred to as edibles, or liquids, called tinctures, made with cannabis, or the smoking of the buds on the marijuana plant. It is possible that the marijuana plant’s multitude of different natural cannabinoids provides an increased therapeutic effect as opposed to a single synthetic cannabinoid.

Cannabinoids have also been researched for their possible use in cancer prevention and cancer treatment. Cancer is most notably defined by the multiplication of mutated somatic cells in the body. The mutated cells have damaged DNA that was not copied correctly during cell division. Cancer cells multiply more rapidly than normal cells and often have altered functions due to the cells’ mutated genetic code.

Cannabinoids have been proven to stimulate the apoptotic pathway in cells, which is the programmed death of a cell that has acknowledged that it is no longer functioning efficiently. In this way, marijuana can actively prevent tumor growth by signaling cancerous cells to “commit suicide.” Also, the cannabinoid receptors arrest the Growth 1, or G1, phase of the cell cycle. This ultimately prevents the cancer cell from maturing any further, which would inhibit the number of harmful toxins created by the cancer cell. 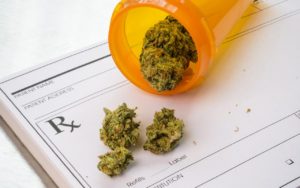